A Few Words About Us

Brothers Patrik and Hynek Hradecký have created brotherly singing duo that has been presenting itself in various musical genres. 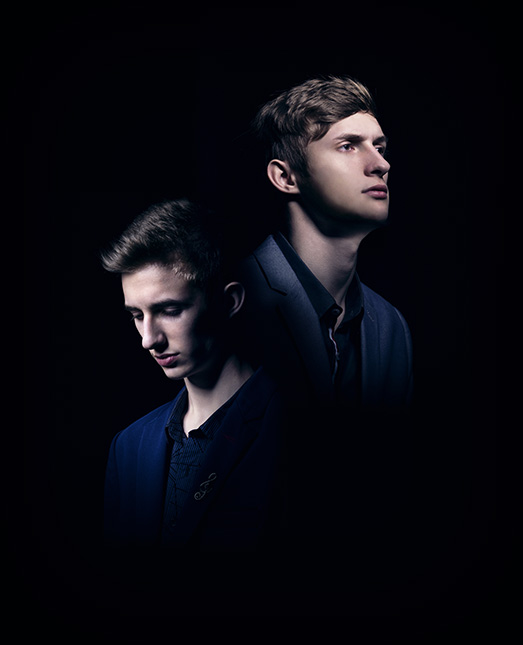 The youngest of brothers, who can´t close his mouth from the cradle, has been guided to music since the childhood. He can play the pipes, the flute, the clarinet, the guitar and he sings of course. He has been attracting attention of audience by his talent since his early childhood when he first stepped in the stage.

He became a multiple winner of the nationwide singing competition of folk songs called Zpěváček (A Little Singer), he also won in the field of classical singing in nationwide competitions Skřivánek (A Little Lark), Pražský pěvec (Prague Singer), competitions of art schools or the Song Competition of Bohuslav Martinů. In the field of pop music he became a multiple laureate of the competitions Junior Talent, Little Star, Czech Land Sings, Orbit and Little Lark. He has been twice awarded by the Hetman prize of the Pilsener Region for his singing performance, also for his excellent representation. He was awarded by the prizes of Beno blachut, the Pearl of the Pilsener Region Prize or Romanian Crystal Prize for crystal voice.

Patrik actively performs together with his brother Hynek Hradecký, he also gives a guest performance in the Big Band of Felix Slováček, he plays along with leading musical organisations and celebrities of the Czech stage, he also plays along with wind orchestras and folk art ensembles around all the Czech Republic (Broln,VUS Ondráš, Konrády´s Bagpipers Band etc. …)

Patrik has already performed in various musicals and operas. Besides doing activities above mentioned he is a student of Secondary Technical School of Information Science and Financial Services in Pilsen. He loves nature, he likes doing sports and his hobby is fishing too.

The older of the two brothers, whose life is just music, can play the bagpipes, piano, flute and of course he sings. Hynek just as his brother Patrik has started to perform in music since his childhood.

First he drew attention to himself in 2009, when he won as the first pupil of the primary school in Pilsner region nationwide competition Karlovarský skřivánek (Little Lark of Karlovy Vary). Many other musical achievements in various musical competitions came after this event (Zpěváček, Little Star, Singing Competition of Bohuslav Martinů, Orbit, etc. Hynek has become the prize winner of several awards – the Hetman prize of the Pilsener Region for his excellent singing performance, The Prize of General Manager of HZS of CR Miroslav Štěpán, The Prize of Bohuslav Martinů for song interpretation, The Prize of Audience in Czech Land Sings, etc.

It has been possible to know him from YouTube since 2015, where he has been recording his own original musical work and also cover versions of various songs by leading Czech singers. Besides Hynek´s own solo projects he performs together with his brother Patrik too, they play and sing along with diverse folk art ensembles, wind, swing and dance bands or orchestras.

Hynek graduated from the Business Academy in Domažlice and now he has been studying Conservatoire and Faculty of Pedagogy in Pilsen. Besides music he likes sports and nature.

Use above mentioned data to contact us or leave us a message via the form.